English Theatre Milan in collaboration with Teatro Out Off 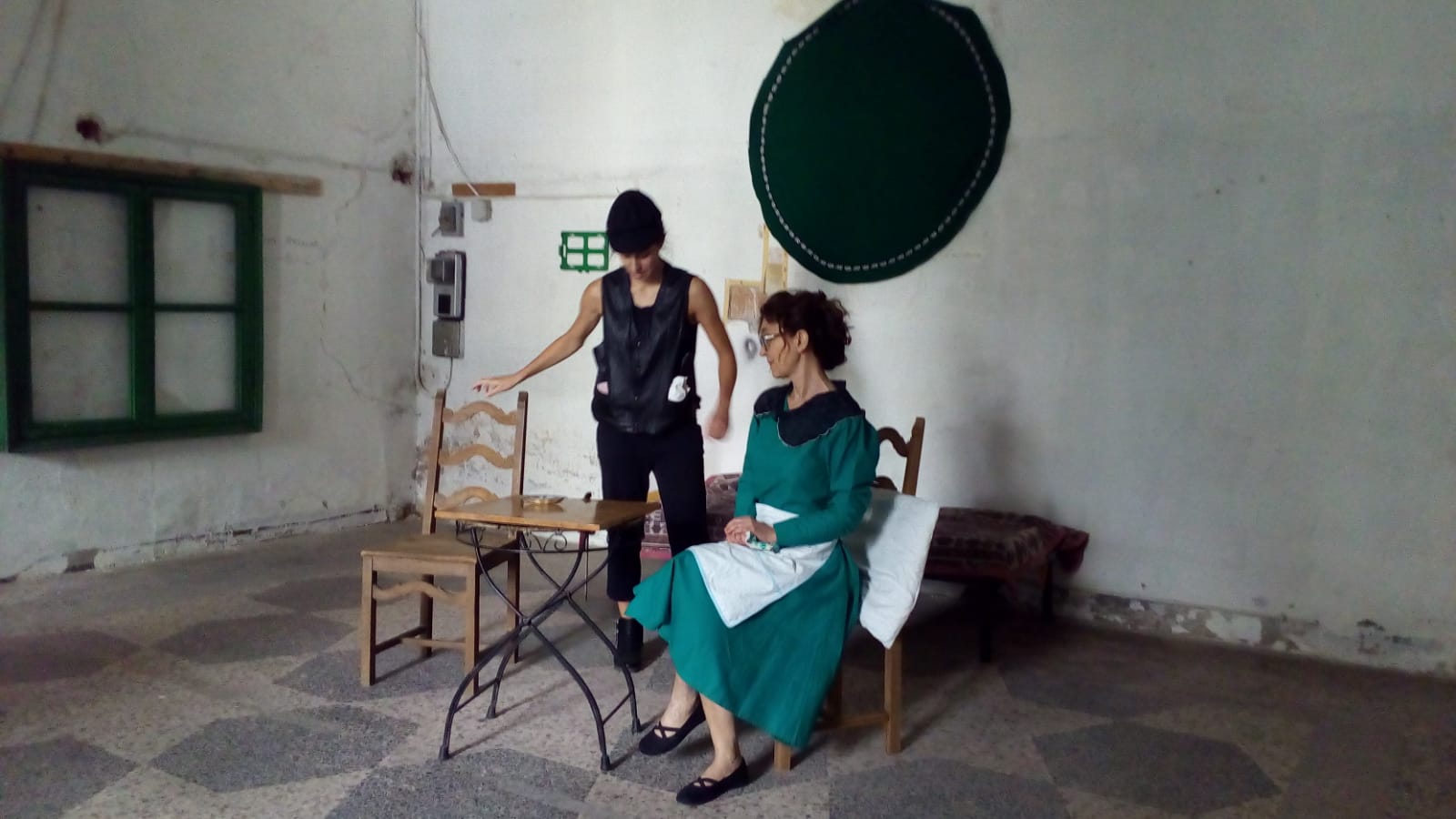 A Farce by John Maddison Morton

English Theatre Milan was founded in 2019 by Maggie Rose, Sal Cabras and Julia Holden to create an English speaking community of theatregoers in Milan and bring top quality theatre in English to the city. We have also started producing our own ‘home-grown’ shows and are pleased to be working with Out Off on this new schools project.

Box and Cox, produced by ETM and adapted and directed by Sal Cabras and Maggie Rose, marks the beginning of this collaboration. The play will be performed at the Out Off and tour schools from mid-November. The props and costumes fit inside a suitcase, so wherever your school is we can reach you.

The Plot of Box and Cox

Box and Cox is an exhilarating 19th century farce, with a highly entertaining plot:  Mrs Bouncer, a devious Victorian landlady, rents the same room to two young men: Cox, a hatter, sleeps there at night, while Box, a printer, uses the room in the daytime. When the two men meet mayhem breaks loose, and Mrs Bouncer is forced to confess. The bizarre and inlikely surprises do not stop here: Box and Cox discover they share the same fiancée, Penelope Anne, a middle-aged widow and the owner of hundreds of seaside chalets, whom neither of them really wants to marry. A final bizarre twist suggests the two might even be long-lost brothers.

Why have we selected Box and Cox for students between 14 and 18 years old?

This 19th century English farce, exquisitely written by Maddison Morton in 1847, was a smash hit in the 19th century (it had over 400 performances) and is still going strong. Victorians, very much like us today, loved going to theatre for a good night out, and farce, comedy and melodrama were their preferred genres. At the same time Box and Cox alludes to important issues in Victorian society, such as housing and migration, identity, alienation and the family, which are still relevant today. It also includes a variety of English accents and ways of speaking.

Farce entertains the audience through situations that are exaggerated and absurd. Farce is also characterized by physical comedy, the use of nonsense, and stylized performances. Characters tend to be types rather than fully rounded individuals. In Box and Cox is seems impossible that these two young men have been duped by Mrs Bouncer and have been living in the same room, without realizing it. The many coincidences, such as Box and Cox having the same fiancé, a middle-aged widow, or the discovery that they are long-lost brothers, are equally unlikely.

The play was written in the 1840s when the Industrial Revolution was underway and England was a huge colonial power. Migrants flocked to a fast expanding capital city, where work could be found. Due to the massive influx of migrants from other areas of the United Kingdom and in small part from the rest of the world, London experienced a severe housing crisis. Like today in our big cities, landlords frequently exploited the situation. In 1845 there was the Irish Famine, or Great Hunger, as it was commonly known, and thousands of Irish men and women left their homes, looking for work in London and further afield. The circumstances, in which Box and Cox live, reflect the harsh conditions of workers in the Victoria age, whose daily survival depended on having relatively cheap coal for their fires (for heating and cooking), candles for lighting their home, and very basic foodstuffs. Even a single match or a tiny bread roll were important.

The similarity of the surnames, Box and Cox, is funny but also alludes to the anonymity and alienation of life in a big city. Box and Cox are also single men, who have left home and are living alone, signalling the beginning of the breakdown of the nuclear family in Britain.

Our production of Box and Cox has another important characteristic that should appeal to students and is a way to introduce the idea of different English accents and ways of speaking. Apart from RP (received pronunciation) which is fast decreasing (today it is estimated that only 2 percent of the population in the UK speak RP), there are many varieties of English.  In the UK these include Cockney, Estuary English, Yorkshire, Liverpudlian and Glaswegian, to name just a few. Some of these feature in Box and Cox and will be unpacked in our workshops. Students today learn their English on social media as well as at school and so experience an abundance of difference kinds of English from the UK but also Englishes from America, India, Australia, Canada, etc.

These topics may be linked to curricula subjects such as English literature and language, Italian literature, drama and history.

Our cast of young bilingual actors, including Harriet Carnevale (Box), Giacomo Carson (Cox) and Maria Coduri and Anna Dyshleva (Mrs Bouncer), bring a distinct freshness and energy to the play that will appeal to young audience members.

Following the performance (lasting 50 minutes), Maggie Rose, a specialist in British theatre and performance, together with our bilingual and bicultural cast can run a workshop (one or two hours), when students will get a chance to act a short scene from Box and Cox and practice the different accents and types of English speech mentioned earlier. Other practical exercises will develop some of the issues the play raises (migration, identity, etc). Students will also be invited to consider why theatre, a live medium, is so important in our technological age.

Maggie Rose, director and adapter of Box and Cox

After a PhD at Lancaster University in European Symbolist Theatre, Maggie taught British Theatre Studies and Performance at Milan University until 2019, where she still teaches the M.A. programme. A playwright, dramaturg and workshop leader, she is a member of the Scottish Society of Playwrights and Scotland’s Playwrights studio. Her stage plays, adaptations and translations, some of them co-written, exploring issues of multiculturalism and migration, have been presented at the Edinburgh Fringe Festival, Traverse and Gateway Theatres (Edinburgh), Oran Mor, Arches and Tron theatre (Glasgow), Soho Theatre (London) and the Piccolo Theatre (Milan). The site-specific plays, Caliban’s Castle, Shakespeare, Secret Agent, Harlequin and Shakespeare, Ltd, A Walk in Shakespeare’s Garden and Ophelia, Herb Woman (the last two shows, directed by Donatella Massimilla, were supported by the Polo Museale della Lombardia and were part of European Heritage Days) have been performed in botanical gardens, parks and villas, including Shakespeare’s Great Garden in Stratford-upon-Avon. They reflect her current interest in food, the natural world and sustainability in Shakespeare. She is currently developing the documentary, Shakespeare, Arlecchino and Green Passion. Her forthcoming book: Herb or Wise Women in the Renaissance and the New Millennium.

Sal Cabras, director and adapter of Box and Cox

Sal started off his career in marketing and journalism. For the last fifteen years he has worked as a writer and a translator. His plays include the trilogy Inferni Maggiori: Dante, Bonconte, Hilde. In 2013 Europa, Our First Migrant, the winner of a Creative Scotland award, played at the Edinburgh Fringe Festival and toured to about fifteen Scottish islands. In 2018 Hilde was performed at Milan’s Società Umanitaria and was later made into a film by Claudio Papalia. Other plays: Alice Underwater, Quattro Pezzi Veloci (‘Cashcowboy,’ ‘Festa del Perdono,’ ‘Q&A,’ ‘Scrivania’). In 2016 he adapted for the stage J. C. Oates’ Lovely, Dark, Deep, a short biography of the American poet Robert Frost. His translations include plays by Alan Bennett, Edward Bond, Caryl Churchill, Hanif Kureishi, many of which have had productions in major theatres and festivals throughout in Italy.

Susan Marshall is professor of 20th Century Fashion in the Fashion Institute of Technology (New York) Department at Milan Polytechnic and lectures on the Fashion Archive and Heritage Management course at AFOL Moda (Milan). She is the costume designer for the prison theatre company San Vittore Globe Theatre and is undertaking a practice-based PhD at Goldsmiths University of London, in the Theatre and Performance department. Her thesis on “Insubordinate Costume” explores the pivotal role of scenographic costume in performance and the fundamental importance of play in the performer’s creative approach to costume.

Harriet Carnevale, bilingual English Italian, has performed both in English and Italian. In particular, in the short film A Ripple in the Water for Southampton Solent University, UK in 2013; in the play Sweeney Todd directed by Tuirenn Hurstfield in Covent Garden, London in 2014 and in the comedy The Amazing Clinic of Armour and Smith directed by Caitlin Sherret at Edinburgh Fringe in 2017. In May 2020 she took part in Pirandello 2.0, directed by Lorenzo Loris, artistic director at Teatro Out Off. She trained in the Stanislavskij System and Meisner Technique. Moreover, the skills acquired from dancing Tango allow her to explore theatre performance with a physical and intuitive approach. Since 2015 she has taught English at Milan’s British Council, CELTYL and CELTA certified with grade A, to both adults and young learners (from 6 to 18 years old), implementing a kinaesthetic approach to language acquisition in which words and sounds are associated with simple gestures to favour a more natural and instinctive learning process.

Giacomo Carson  (b.1997, Milano) is an actor, pianist and dancer. He first stepped onstage thanks to the Milanese theatre academy, Quelli di Grock, in his last year of middle school. In 2017 he co-founded Compagnia Monoval, a theatre company based near Modena. During his time with Monoval, he performed in Milano, Bologna and Carpi in an adaptation of Cocteau’s Les Enfants Terribles. For Monoval, he also co-rewrote Roberto Vaccari’s biography of Ciro Menotti, a leading figure in the Modenese Risorgimento. Today he works freelance. In May 2020 he played in Pirandello 2.0, an experimental project directed by Lorenzo Loris, artistic director of Milan’s Teatro Out Off. This quarantine- inspired online reading of Pirandello’s Uno, Nessuno e Centomila was adapted by Renato Gabrielli. With a decade of piano studies (recently specialized in jazz) and years of swing dance training under his belt, he aims to devote his life to show business.

In 2006 Maria Coduri discovered the joy of performing at Emerson College, Forest Row, while she was living and studying in London. Since then she has been on clowning and improvisation courses in the UK and took part in Action Theatre workshops with Sten Rudstrom in Berlin. In Italy she trained in the Stanislavkij method with Roberto Cajafa and later moved to Teatro Libero where she studied under Marisa Miritello. She has been in a number of amateur productions, among which: Un tram chiamato desiderio by T. Williams, La cantatrice calva by E. Ionesco, Le intermittenze della morte by J. Saramago, Notre Dame des Fleurs by J. Genet, Line by I. Horowitz. She is currently rehearsing Trappola per topi directed by Augusto Zeppetelli who worked extensively as an actor with Giorgio Strehler. Maria teaches English in a secondary school in Milan.